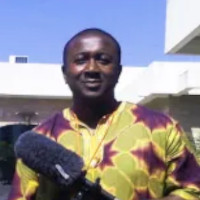 As a multi-skilled camera-op/director/producer, Roy Agyemang built up his production credits working on populist observational documentaries for British broadcasters. His documentary credits include Ferry up the Amazon (BBC); Abi Titmus: A modern Day Morality Tale (Channel 4); Football Icon (Sky One), Katie & Peter: The Next Chapter (ITV 2).

In-between productions, he developed his own projects including covering the Liberian elections in 2005 where he gained access to George Weah, the former world footballer of the year, aiming to become President of Liberia.

Born in 1974 in London, Roy was a child actor playing roles in Grange Hill and The Bill. He attended Ravensbourne School of Broadcasting gaining the technical skills behind the camera before directing and presenting current affairs stories for Kudos Productions youth channel, Rapture TV.

With a growing passion for politics he put forward a youth manifesto as leader of Generation X in the buildup to the 1997 UK General election. Anglia TV produced a one-hour programme entitled Generation X: Election Special.

Roy became the face of newly launched Fox Kids UK, presenting a variety of shows. He also went onto present a travel series for LWT and sports programmes for IMG.

Filmmaker Roy Agyemang is granted unprecedented access to Robert Mugabe and provocatively questions whether the Zimbabwean leader is the demon that the western media portrays.

Is there more to President Robert Mugabe and Zimbabwe than is being shown on our television screens?  What’s the true extent of Mugabe’s support inside Zimbabwe? What has happened to the country that they all called the bread basket of Africa – and why?

These questions and more led British filmmaker, Roy Agyemang, on a journey to Zimbabwe to make a documentary about President Robert Mugabe. What started out as a three-month mission turned into three life-changing years, culminating in a rare interview with one of the worlds longest-serving yet most reviled leaders.

Filmed between 2007 and 2010, Mugabe: Villain or Hero? is an epic personal journey, narrated by Roy Agyemang who, together with his UK-based Zimbabwean fixer, Garikayi Mushambadope, found themselves in Mugabe’s entourage, on Colonel Gaddafi’s private jet and around a host of prominent African leaders.

At a time when western media was banned in the country, Agyemang and Mushambadope worked their way through the corridors of power, probing the cultural, economical and historical factors at the heart of the “Zimbabwean crisis”.

In his directorial debut Roy Agyemang draws on a wealth of news footage, including Bob Marley’s historic appearance at Independence celebrations in 1980.  Mugabe: Villain or Hero? is a highly accessible, personal and often amusing film in which Agyemang explores the relationship between African leaders and the West, in the fight for African minerals and land.   In contrast to the usual picture of the dictator we are used to seeing on our television screens amidst scenes of violence, Mugabe: Villain or Hero? is a revealing portrait of the man who was knighted by John Major and honoured with doctorates by the west.

Mugabe: Villain or Hero? was screened for the first time at the BFI in London in December 2012 as part of the African Odysseys.

It was  screened in February 2013 at the Pan African Film Festival in Los Angeles.

The film was also screened on March 3 2013, in Selma, Alabama to commemorate “ Bloody Sunday”, a civil rights march at the peak of the Civil Rights Movement.

The perception of Africa and its leaders had a profound effect on how other kids acted towards me in the playground for being of African heritage.  So from an early age, I wanted to work in the media and show my friends that there was more to Africans than being killed by Tarzan.

African politics was often discussed in our household. My parents left Ghana around the time of the coup that saw the ousting of Kwame Nkrumah in 1966. The coup was supported strongly by the West. Since then the relationship between African leaders and the West has had its ups and downs.

Robert Mugabe is no exception to this love-hate relationship between African and Western leaders. Robert Mugabe is associated with a group of dictators described as the “axis of evil” and in the last 12 years the western media has perpetuated that view.

Based on the information available and from what I could see, the case against Mugabe was overwhelming. But what aroused my curiosity was the fact that Mugabe had not been eliminated by the West and still remained in power, which is no mean feat, especially during the trigger-happy era of George W. Bush and Tony Blair.

Was there more to Mugabe and Zimbabwe than what was being shown on our television screens?  Does Mugabe actually have support inside Zimbabwe? What were the reasons behind the sudden take over of land from white farmers?

I got the opportunity to answer these questions and more when I was introduced to Garikayi, a Zimbabwean based in the UK with good contacts inside the country.

I first arrived in Zimbabwe at the end of 2007 at a time when the country was facing the toughest period economically since Independence.  Against this background the government was hostile to western crews. I had to think outside the box to enable this film to take off. Under normal circumstances a production of this magnitude it would require a cameraman, soundman and production assistant working with me, but I was going into an unusual situation, so I had no choice but to operate as a one-man-band.

Would my view on Mugabe and the “Zimbabwean crisis” differ from those in the powerful western news media?  I was about to embark on a journey uncertain of the outcome. What intended to be a three-month shoot turned into a three-year journey of epic proportions.