Tensions between Continental-born and African-Americans are rarely addressed. Opening with personal testimonials exposing this rift, we are taken through the corridors of colonialism and slavery, laying bare how their effects have divided and bound the two. As we start this journey, one question soon dominates the conversation between the Africans and Africans, 'who sold the Africans into slavery?' The complexity of this question is reflected in the different responses and the range of emotions it solicits.

Director/Producer Peres Owino will be present for a Q&A. 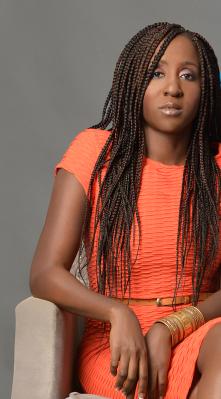 Peres Owino Director/Producer
Peres Owino is a Kenyan born award winning writer/director/actress. Her directorial debut, the multiple award winning documentary “Bound: Africans vs African Americans” (BOUNDAvAA), has played in over a dozen festivals around the world and won the Women In Film- Lena Sharpe Award at the 2014 Seattle International Film Festival, the Audience Award for Best Documentary at the 2015 Pan African Film Festival in Los Angeles and The Best Film Directed by a Woman of Color Award at the 2014 African Diaspora Film Festival in New York City. #BOUNDAvAA was recently nominated for a 2015 AMAA Award. #BOUNDAvAA is scheduled to screen in Koln and Berlin, Germany this September.

August 2015, the announcement of Peres and her latest screenplay, “The Basket Weaver” as one of 12 chosen from 35,000 to be part of the Merly Streep’s NY Women In Film Writer’s Lab. The Basket Weaver was also finalist at the Hollywood Screenplay Contest and Semi-Finalist at the Table Read My Screenplay competition in London. “Seasons of Love”, which she co-wrote with Sharon Brathwaite, and produced by Taraji P. Henson (“Empire”, “Hustle & Flow”, “Curious Case of Benjamin Button”) aired on Lifetime Network and garnered them a 2015 NAACP Nomination for Outstanding Writing of a Television Movie. Peres and Sharon first worked together on the script “The Call”, a short film about HIV. The Call won several festival awards, including the Mel Van Peebles Award at the San Francisco Black Film Festival. Peres’ writing resume also includes her first original play, “Beauty For Ashes”, which premiered in 2009. Critics called it, “bold and daring”. She followed that up with the short play “Cut” which premiered at The Walt Disney Concert Hall – REDCAT in 2010. As an actress, Peres, is an LA Ovation nominee and has appeared in over two dozen plays, playing coveted roles like Hamlet, at the LATC presentation of “Hamlet: Princess of Nubia” and Lady Macbeth, at the Coleman and Smith Artistic company’s presentation of “Mocbet”.

Her most recent acting credits include, the Off Broadway production of the play, “Supernatural”, the feature film “Default”, the TV show “Terriers” on FX, and the plays, “Break The Whip” directed by Academy Award ® winning director, Tim Robbins and “Red Noses” directed by Tony Award ® winning director, Dominique Serrand. A consummate comedian, Peres studied improv at the Groundlings School. Some of her work can be seen in the new Web Series “Buni All Stars”. She also studied standup with legendary comedian Judy Carter and performs in clubs across LA including the famous Hollywood Improv, Comedy Store and Flappers. Peres occasionally blogs at Kenyangirlonanamericansafari.blogspot.com and a collection of her blogs are featured in her debut novel, “On The Verge”, published by Underground Voices. You can follow Peres on Twitter and Facebook at Peres Owino.