EVIDENCE OF THE EVIDENCE 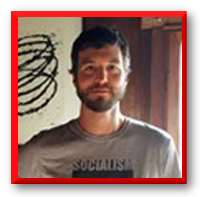 Alex Johnston is a documentary media maker, editor, teacher, media archaeologist and PhD candidate in Film and Digital Media at the University of California Santa Cruz. He holds a Master’s degree in Social Documentation also from UC Santa Cruz. His scholarly and creative work engages questions of narrativity, gesture, embodiment, and historical representation in contemporary media practices, with an emphasis on American social movement history. His films, including Way Down in the Hole (2011), NOW! AGAIN! (2014) and Evidence of the Evidence (2017) have screened at a wide variety of venues, including San Francisco's Other Cinema, the New Orleans Film Festival, Iowa City Documentary Film Festival, Thin Line Film festival, and the Miners' Colfax Medical Center, a convalescent home for retired hard rock and coal miners in Raton, New Mexico. Alex is also the managing editor of the online media journal "Now! A Journal of Urgent Praxis." (NOW-Journal.com)

EVIDENCE OF THE EVIDENCE The 1971 Attica prison uprising is a signature moment of radical resistance for the American Civil Rights movement. The subsequent retaking of the prison however, “the bloodiest one-day encounter between Americans since the Civil War,” is an open wound.

Evidence of the Evidence explores this tortured history through a granular interrogation of its archival materials. Utilizing rarely seen video recordings shot by a New York State Trooper, the film offers a visceral ground level account of the events at Attica, but also chronicles the contemporaneous mediation and narrativization of these events. Recalling Harun Farocki's Videograms of A Revolution, it reflects on the role that moving images play in the production of history and memory, its creation and its destruction. In an era of resurgent racism and authoritarianism throughout the West, Evidence of the Evidence is a timely and urgent work of both agit-prop and media criticism. The film is directed by Alex Johnston.