WHOSE STREETS? Told by the activists and leaders who live and breathe this movement for justice, Whose Streets? is an unflinching look at the Ferguson uprising.

When unarmed teenager Michael Brown is killed by police and left lying in the street for hours, it marks a breaking point for the residents of St. Louis, Missouri. Grief, long-standing racial tensions and renewed anger bring residents together to hold vigil and protest this latest tragedy. Empowered parents, artists, and teachers from around the country come together as freedom fighters. As the National Guard descends on Ferguson with military grade weaponry, these young community members become the torchbearers of a new resistance. Filmmakers Sabaah Folayan and Damon Davis know this story because they are the story. Whose Streets? is a powerful battle cry from a generation fighting, not for their civil rights, but for the right to live. 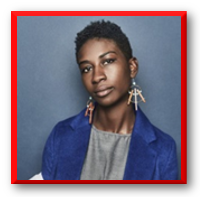 Sabaah Folayan is an activist and storyteller born and raised in South Central LA. As an advocate at Rikers Island, Folayan interviewed incarcerated people about their experiences with trauma. She later helped organize The Millions March, one of the largest marches for racial justice in New York history, in response to the non-indictment of the police officer who choked Eric Garner to death. Folayan entered the world of storytelling through theater, attending the Lee Strasberg Institute of Theatre and Film as a teenager, and performing as a member of the Black Theater Ensemble while a pre-med student at Columbia University. In September 2014, she went to Ferguson with cinematographer Lucas Alvarado-Farrar to learn the truth behind the dramatic scenes playing out on the news. Hearing the stories from the community inspired her to embark on her directorial debut Whose Streets? landing her a coveted spot on Filmmaker Magazine’s annual “25 New Faces of Independent Film” along with Co-Director Damon Davis. Folayan recently directed an episode of Glamour Magazine + The Girl Project’s Get Schooled web series presented by Maybelline. She is a 2015 Firelight Media Producers Lab Fellow, 2016 Chicken & Egg Accelerator Lab Fellow, and 2016 Sundance Institute Documentary Edit and Story Lab Fellow.

Damon Davis (Co-Director, Producer) is an award-winning interdisciplinary artist who works and resides in St. Louis, Missouri. His scope includes illustration, painting, printmaking, music, film, and public art. Davis has work in the permanent collection at the Smithsonian’s National Museum of African American History and Culture, and has exhibited at the Museum of Contemporary African Diasporan Arts (MoCADA) in Brooklyn and the San Diego Contemporary Museum of Art. Acclaimed cultural critic and scholar Jeff Chang licensed Davis’ piece, All Hands on Deck, as the cover art for Chang’s 2016 book We Gon’ Be Alright: Notes on Race and Resegregation. For his work as the founder of independent music and art imprint, Far Fetched, Davis received The Riverfront Times Master Mind Award (2013), St. Louis Soup Across the Delmar Divide Award (2013), and Best Hip Hop Producer SLUMfest Award (2014). He is also a Regional Arts Commission Community Arts Training Fellow (2012) and was named to Alive Magazine's Buzz List (2013). The documentary short A Story To Tell (2013), which profiled Davis, his work, and the creative process, won an Emmy Award Mid America for Best Short Form Program. Whose Streets? is Davis’ first foray into feature-length documentary; Filmmaker Magazine selected him and Director Sabaah Folayan for their “25 New Faces of Independent Film 2016.” Davis is a 2015 Firelight Media Producers Lab Fellow and a 2016 Sundance Institute Music and Sound Design Lab Fellow at Skywalker Sound.